The Earth Angels initiative of the "Bike Hard!" idea is to create a community of bicycle enthusiasts and give to its community specific attitude. Our bicycle community consider itself as "Outlaws" in society of gas fueled engines and irresponsible CO² emissions.
Negative appearance in mass media often results into promotion for response-less CO² emissions. The right question for our approach is: Is it possible to present bicycle driving so negatively, so it appears to be cool?
A good example is the mass media appearance of criminalized bike gangs like »Hells Angels«. Unattended and vice versa romantization of bike gangs on TV, in movies and video games results into a simulacrum of freedom and independence. This affects the consumers consciousness. »Easy rider« is dead and replaced by criminalized rowdies. These are not aware of their ecologic, social and economic footprint. The natural response to the unawareness of this ignorant attitude is to smash this fata morgana. One way is humor and sarcasm.
We asked ourselves: How can we use visual language to let bicycling appear »bad to the bone«? While putting our ideas together we focused on using typical symbols and styles combined with a good sense of sarcasm. In our final idea we pointed out three important things: symbolism, attitude and shared identity. We use a strong and simple symbol: the pentagram combined with a bicycle. To give it the attitude we use the slogan: »Bike Hard, be responsible!« for which we designed a logo. Like bikers do we recommend to wear a tattoo with the symbol or the logo. You can use simple tools like transfer foil or make a stencil and trade it with a black marker. We placed templates at the disposal of this article. There also templates for self-made stickers. Smaller ones and ones you can apply on your bicycles spokes. To share your identity there is the growing community »Earths Angels« which will go international. 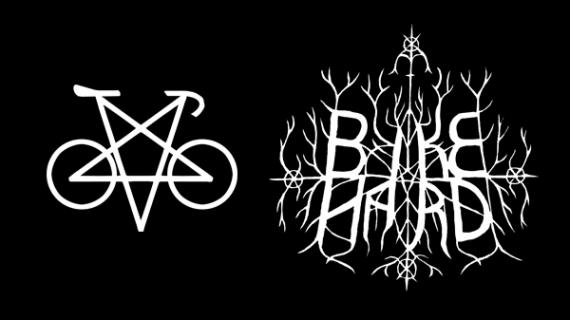 There is a new trend on being cool! Tattooed bicyclers around the globe are forming bicycle gangs with the head name »Earths Angels«. Be part of the community and...
Bike hard, be responsible!