When comparing ethical attitudes one could simply come to the conclusion that one country may be more ethical than another. But for supposing this one would also have to assume that there are global ethical principles which apply to all countries.

Therefore, in order to compare two countries a better approach is to take a look at what is considered to be ethical by managers and staff in specific countries.
Furthermore some questions can help to understand ethics in different countries:

Variables in cross-culture analysis may be context, content and conduct.
Context can be anything like religion, gender or family background but also organizational and political structures. Context forms a framework within ethical decisions are made. Content is, among others, defined by national, organizational and personal values but can also be influenced by commitment and loyalty. Behavioural theories may see conduct, the observable behaviour, as the main subject of social interaction. The three levels, macro, meso and micro, of conduct include intercontinental, international, interorganizational and interpersonal interactions amongst other things. 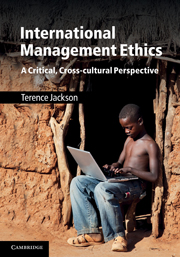 In terms of ethical consequences this means that societies cause values and rules, which determine what is wrong or right and what is ethical or not.

Especially in the United States of America cross-cultural management has grown. Though, ‘American-ness’ is still very often taken for granted. Values like personal liberty, democracy and reward for individual achievement origin from a value system which roots in a white, protestant American society and may often lead to an excessive focus on short-term results at the cost of long-term interests.

In Europe values may differ in several countries. In Germany ethics is less reflecting moral predicaments but serves to justify norms and values. For Germanys neighbour France moral philosophy only recently became a systematic discipline again, which is the same as with applied ethics and practical questions in Britain. But also ideological forces have differentially influence in different countries.

For example while the Catholic Church has much influence in Italy it has significant less power in the Netherlands. Also family is very important in Italy, and therefor in business too.

In contrast to Europe and the United States of America Africa is analysed. In this context it is important to question if ‘Western’ values are the ideally solution for problems concerning African companies. Also, though it may not be a local phenomenon, as a result of a post-colonial management system corruption exists. But not only is corruption found in organizations but also banks for which adapting to the local market maybe means to making dubious payment transactions.

When moving to the east instead of Christianity other principles like Confucian ones may influence organisations, both at home and aboard. In China paternalistic hierarchy seem to be still present and Western values such as democracy may even mean harm to a country like this.

Though, China is a communist state since more than sixty years it is one of the largest economic powers and is, just as India, able to compete with capitalist powers like Europe or the United States of America despite their very different values.
Another value sometimes found in Asia may be the loyalty of employees shown to his or hers employer in return for his protection and doing what is best for the employee.
The values and moral found in China and India were not created within a short time but are a result of seven thousand years of recorded history.

For cross-cultural relation a few issues may occur: